Last night (very early morning lol), while messaging my friend Edelweis about the upcoming events in the next week, I remembered a sudden flashback of an event which had happened during exchange when my friends Kathleen and Edelweis visited me hahaha.

It was the 3rd of December and we went to Shinjuku and then headed to Harajuku haha.
We were on the train on the way back to my dorm/sharehouse and looked like this 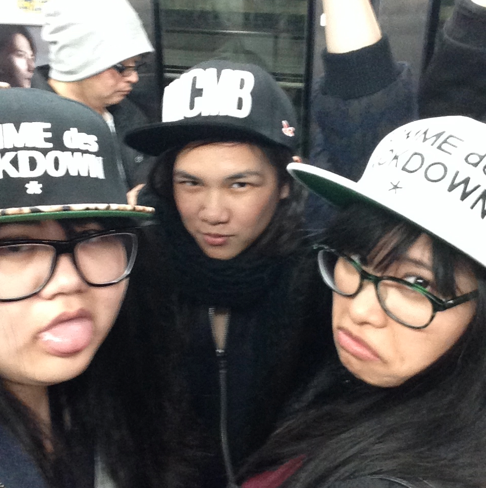 Anyway, we're not allowed to have guest up in our rooms, just the common area which is the lounge, but I snuck them into my room on the top level (the fourth level) and chilled there for a bit. at around 7:30 PM I could hear my friends downstairs come home from my window so we were yelling at each other from the window and my friend David who was the wall opposite me had his window open so we were talking! My friends Niemalie, Duc Anh and Shogo then went upstairs then we all decided to go downstairs because we wanted to have dinner at Coco's across the road haha.

Niemalie and Shogo were ahead of us going down the stairs and before we could even reach the hallway, they ran back our direction with panicked expressions on their faces saying "guys omg the dorm manager is here!" Because one of our oppas were talking to our dorm manager because he needed her help. Oppa was giving me eye contact as he knew what was going on and mouthed "just wait". So then we panicked, and Kathleen and Edelweis had no way of not being seen if they went to the hall way, they went to the door just below the end of the stairs and I could see Edelweis tug the door knob in hopes of opening, she gave up then started banging the glass door until she finally gave up and rested her palms on the door until her hands slid down in defeat. It was like ESCAPE IS IMPOSSIBLE. I saw this entire thing happen. it was so hilarious. 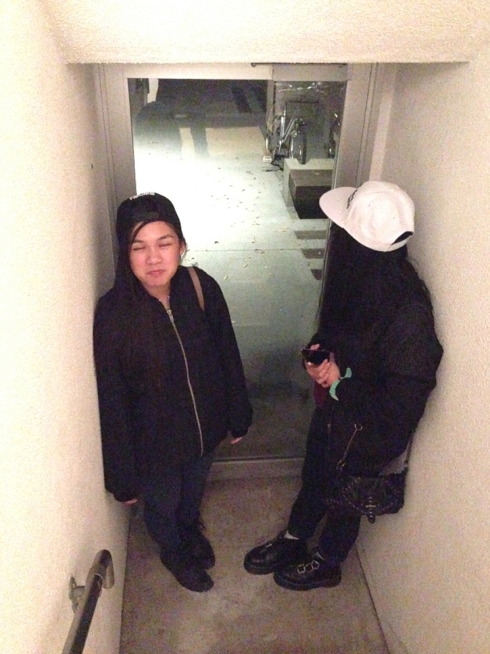 They were basically in this state for a full ten minutes until the hallway was clear hahahaha.
Look at Kathleen. LOL Check out the gap between her facial expression in the picture on the train then compare it to this one where escape is impossible. I was walking back and fourth from the hallway and from where Edelweis and Kathleen were hiding and I saw the creepy French exchange student walk past and Edelweis told me he was staring at them like WTF. haha

When our lovely dorm manager went back to her room, we ran through the hallway and went outside haha. Since my friend Duc Anh needed to collect the suitcase he ordered from our dorm manager!
Then our dorm manager said hello to us and stuff, I just wanted to be like "HAHA IF ONLY YOU KNEW MY FRIENDS HAVE BEEN IN HIDING FOR TEN MINUTES" LOL

Then all was good and we had our dinner across the road with Rebekah, Niemalie, David and Shogo!

This was probably a 'you-had-to-be-there' moment, but i don't know! it was funny! haha
Posted by Unknown at 12:30