So on the 26th of November until the 2nd of December 2014, I ventured to Hawaii! My friend Edelweis who was on exchange in Yokohama at the time met up with me in Honolulu International Airport :) Our flights were only 15 minutes apart so it was all good yay!

In Hawaii we did a lot of shopping because it so happened to be the Black Friday sales while we were there! It was fantastic :) 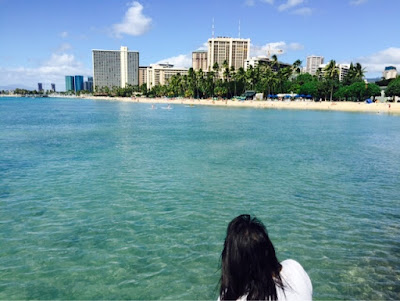 26/11/2014
We arrived in Hawaii! We were really really sleepy, the hotel people were soooo nice and let us check in early... the staff were legit perfect! We love you Coconut Waikiki Hotel♡
We walked around, had IHOP then caught a bus to Ala Moana Centre, found Jollibee, then went shopping at Victoria's Secret AHAHHA then we went to WALMART then bought so many things... looking back we were kinda stupid, we carried so many drinks. such idiots haha.
After that we went back to our wonderful hotel and freshened our jet lagged selves with a shower then proceeded to have our Jollibee for dinner! Edelweis was so happy since she hasn't had it for like.. almost ten years haha. I was so tired that I fell asleep on the dining table while eating dinner while holding my fork LOL. 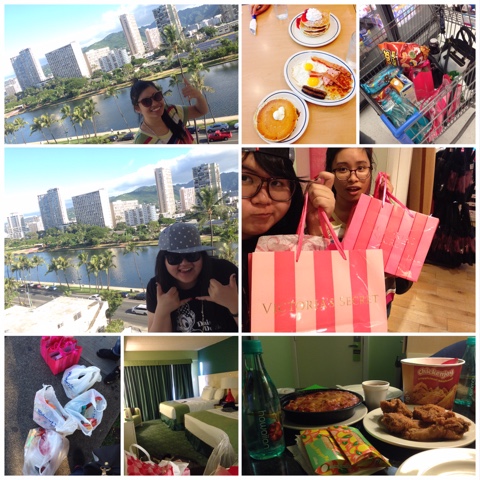 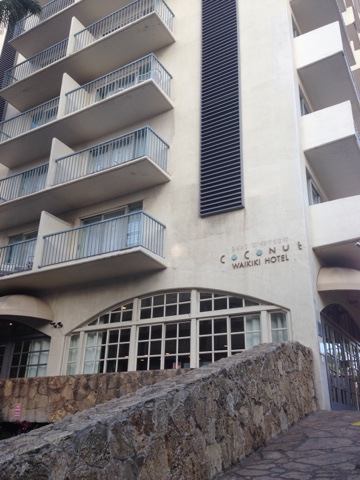 27/11/2014
Soooo, we went to Waikiki Beach in the morning while sipping our Starbucks frappucinos and it was so wonderful :)
For lunch we went to gyukaku HAHAHAHAHA then went back home to take a nap then got changed to get ready for Black Friday HAHA. We took Edelweis' suitcase with us because we were gonna need it for Black Friday!
We then had dinner at Doraku because my cousin recommended it! Was yummy.
After dinner we walked to Ala Moana Centre to burn what we ate... we got there at about 10pm then we went shopping at Macy's, Victoria's Secret, Old Navy, Sephora, Bath and Body Works... I don't even remember the rest haha. Probably Pacsun? haha 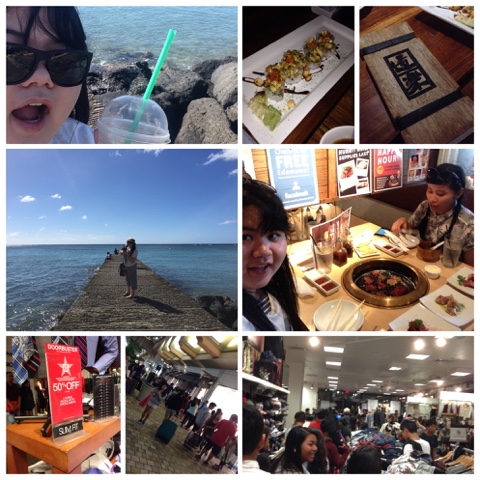 28/11/2014
5:00AM we caught a bus back to the Hotel from our shopping escapade.. I don't remember, we got back about 5:30 then took a shower then slept for about an hour and a half then got up and got ready as we were going to Waikele and there was a shuttle pick up service for the factory outlets. We went shopping, Coach, GAP, Converse, Levi's ehhh I don't remember the rest but we went nuts! We were so tired though haha. So when we went home it was like almost 6pm, we took like a bit of a nap then headed to the Cheesecake Factory for dinner, it was so freaking good! We had to wait about an hour so we killed time at Forever 21 next door! But we overestimated our stomachs capacity and ordered way too much food! 29/11/2014
Caught a bus to Ala Moana Centre because we wanted to go back to Walmart again ahahaha. But we screwed up and ended up in Chinatown haha. We made it to Walmart somehow but ate some American frozen yoghurt then we bought a lot of stuff at Walmart! Then we went back to our Hotel and then freshened up a little bit, and walked over to our pick-up area as we were going to our Luau!

The entire Paradise Cove Luau experience was amazing! It was so much fun, from the moment we stepped into the bus we felt the ohana atmosphere and cousin kaleo was legit the best! The food at the Luau, the performances were top notch, as well as ikaika hahahahhaaaaaa ♡

The funniest part was that when we chose the Alcoholic Mai Tais, they asked to look at our IDs and then gave us a bracelet each to prove that we were old enough to drink. We probably looked like two little girls all alone in Hawaii LOL. 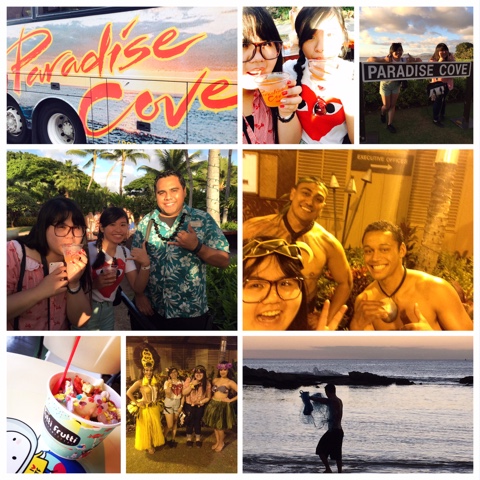 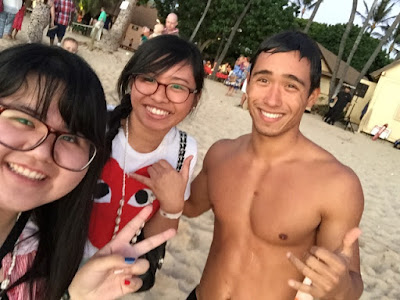 30/11/2014
This day was pretty chill haha! We went to Eggs & Things for lunch, then Ala Moana centre to buy some stuff like from the Honolulu Cookie Company, had Dairy Queen and got the Pumpkin Spice flavour!
Then we headed to Lanikai Juice and bought a Dr. Green and an Açai Bowl! Was sooo good, then ended up at Starbucks so we could sit somewhere... we bought peppermint cake pops haha. 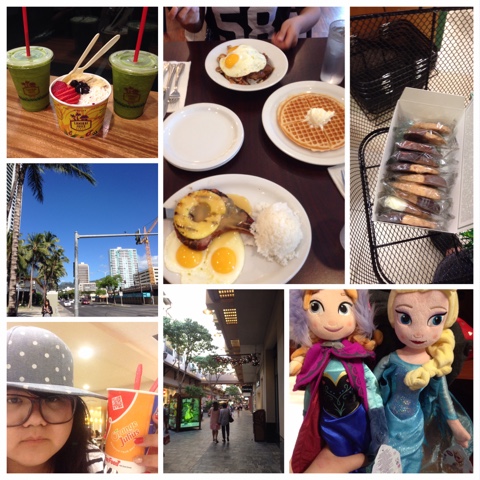 01/12/2014
Early day! We had a full day tour of Hawaii on this day and we needed to be ready at the pickup location at 6:30 AM and I swear we were both still half asleep.
Our first destination was Pearl Harbour, was a pretty deep and historical kind of place. Then we went to the Dole Plantation, the Dole Whip was so delicious! Then we went to a beach and soaked in the fresh air.
After that we went to the Polynesian Cultural Centre and can I say... this was probably the highlight of my day, it was literally like a Disneyland of Polynesia, was so fun! And the people working there were so funny and friendly! Not to mention the amazing buffet haha. Felt the ohana love♡

After the Polynesian Cultural Centre, we drove up the North Shore and looked at the amazing views and ended up to where Jurrassic Park was filmed!! Haha it was so windy but it was fun! Then they took us to Byodo-In Temple which was replicated exactly as how it was in a place in Japan. It was really pretty. After that, our wonderful tour guide drove us to Hawaii's windiest point - Nu'uanu I think and it was the most wind I've experienced in my life! We both felt like we were going to be blown away by the wind HAHA.

When we got back to Waikiki, Edelweis and I decided to have dinner at the Cheesecake Factory haha. We did better this time at how much to order, but honestly it was still a fail LOL.

Got back to the hotel and I started packing my suitcase and YASSSS! I fit everything haha. 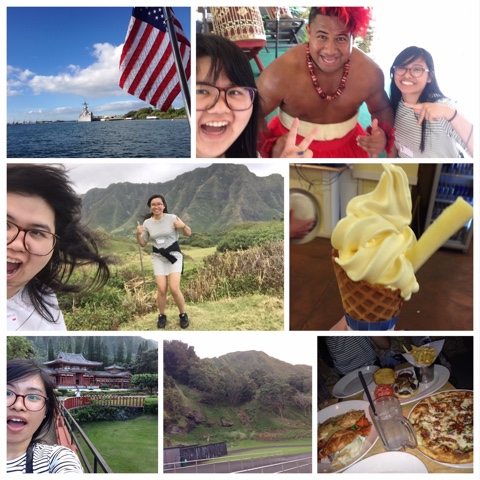 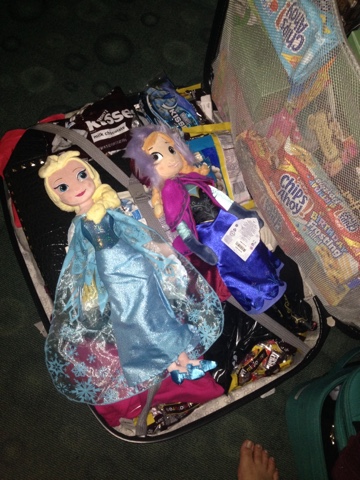 02/12/2014
Our last official full day in Hawaii was spent chillin at Ala Moana Centre doing some last minute shopping at Zumiez and then yea Edelweis got her Pumpkin Spiced Latte HAHAHAHAHA.
I had a Jollibee burger steak for lunch and I also bought a Cheeseburer ... I ended up donating the cheeseburger to Edel because she hated what she bought for lunch HAHA.
We walked around the centre, then went to the TRUMP tower... what a fancy hotel haha.
Our last dinner in Hawaii was at Eggs & Things at Saratoga Road! Was so good! 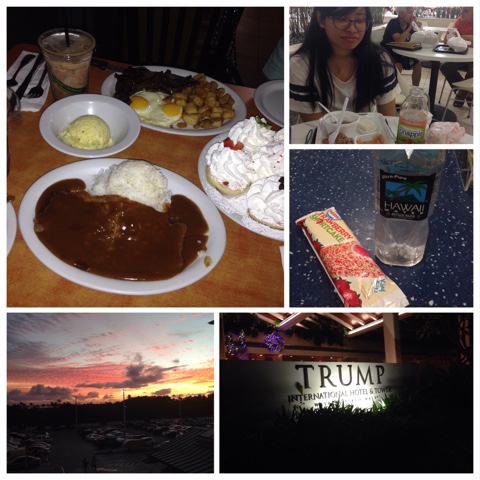 03/12/2014
We both headed to the airport sooo early in the morning lol.
Because Edelweis' flight to Tokyo was three hours after mine, she went to the United counter to suss out where it was, after about 15 minutes, she walked back over to me and told me that they let her check-in early thinking she was a lost child like "are you okay? are you lost?" and she was just like "no I'm just checking in" HAHAHA.  Anyway she paid for wifi in the airport to do her assignment. On the way to security, a lady working at the airport approached us and asked us "Are you girls okay? Do you know where you girls are going? Looking for someone?" and we were just like "Um, we are okay... we're just going to security to go to our boarding gates" It was so funny. They thought we were younger than our age again HAHA. Like lost children. LOL

It was so sad to leave Hawaii, and yeah me and Edelweis didn't wanna say goodbye to each other but it was like "See you in two months bro!" then I was like OH YEAH! SEE YA!

My flight was delayed! But all good, I made it back safe and sound, Thank God! :) 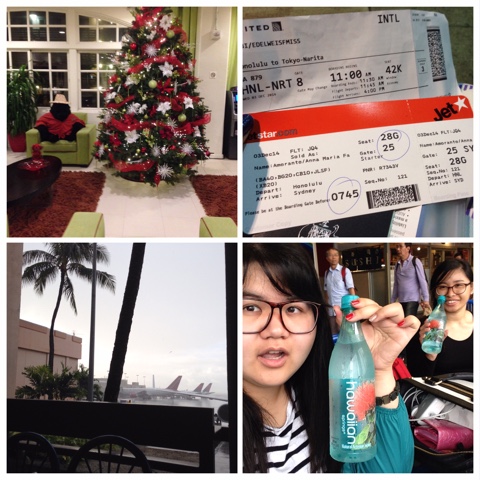