I went to Taiwan and looked for Chihiro 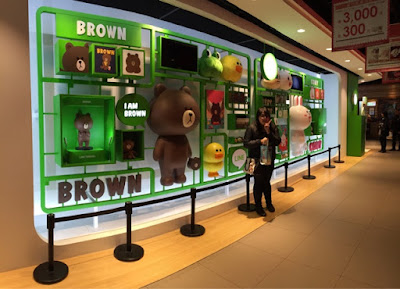 29/01/2015
Arrived at Taipei Taoyuan International Airport and was picked up by three amazing people! Sen, Haku-San and Lai!! When I met up with them, I was so excited and I was filled with so much excitement aaaaaaah!
On the bus on the way out of the airport I felt like it was surreal, it was a new place and I was so happy! I was literally looking around outside the window and everything!
We went to Shilin station and met up with Irene who let me put my suitcase in her family's apartment so it would be easy for me to walk around Shilin Night Market and enjoy, I was seriously so Thankful!
Safe to say that during that night, I ate everything.
- They recommended to me a really delicious and famous Papaya Juice, so I had that!
- I had Hot Star fried chicken which was literally bigger than my head (my head is pretty big ngl) For $1.80 AUD. In Sydney, the Hot Star fried chicken is about $8.00 and my Taiwanese friends couldn't believe it haha
- Another type of fried chicken and it was spicy was nevertheless delicious
- Rice Sausage which was something I've never had before so it was interesting and was yummy!
- We had three huge bowls of Taiwanese desserts which equated to about $5.00 all up and I couldn't believe how cheap and delicious it was haha.
- Then we had this amazing Chinese medicine pork rib soup? Something like that! Not quite sure about the name but it was so yummy!

Then we separated ways and Sen took me to her family's home :) I was so nervous but despite the language barrier between her parents and myself, I could feel their kindness echo towards me :) I was really happy. 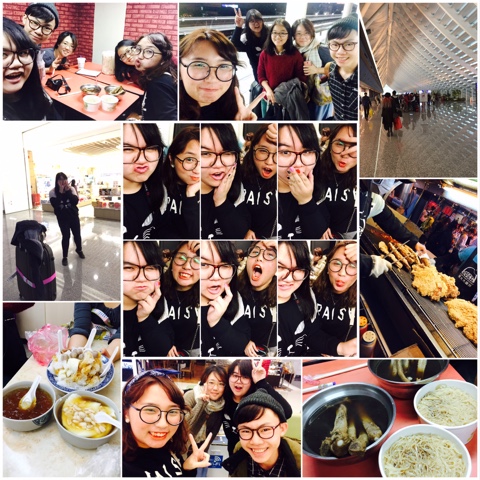 30/01/2015
This day started with Sen's family taking me out for one of Taiwan's famous breakfast spots called Laya Burger! It was so good. Sen informed me that breakfast restaurants are quite common in Taiwan. I thought this was pretty amazing because we don't really have this kind of concept in Australia. We all went home then Sen and I got ready to leave the house again to venture :)

I got my Taiwan IC card!! It was Hello Kitty and pink and soo cute haha! I got it from
7-11 and put money in it. Then we went to the place where we were going to catch a bus to Sen's mountainous University.
But before that, Sen took me to a delicious hotpot restaurant! Aaaah, it was so good haha. I was really satisfied with my lunch and they even had ice cream lol.
After that we went to her uni up in the mountains, and no joke.. it was seriously up in the mountains! The weather felt different up there, in comparison to below the mountain, was amazing. It was windy but I had fun. The uni had one building which had like a Chinese style roof next to the door and I thought that was cute!

After we went to her uni, we made our way to Jiufien, or Kyuufun by Japanese people ahhaha! It's the place where Spirited Away was based on... it was seriously so beautiful! But there was one disappointing thing, the rain was so bad it was pouring so badly that we went and bought ponchos, and we couldn't really look at the stalls and buy food and stuff because the rain was just so bad and it was slippery. But yeah, it was still pretty and I had fun being there because the place felt really magical. It felt quite surreal.

The rain was so bad that even though the taxi was a little pricey, I insisted on paying for it and just going straight to the city because we were soaking wet and uncomfortable lol. When we got back to Taipei, we had dinner at a wonton noodle shop and was really yummy! I was so happy that Sen was taking me to all these amazing places :) 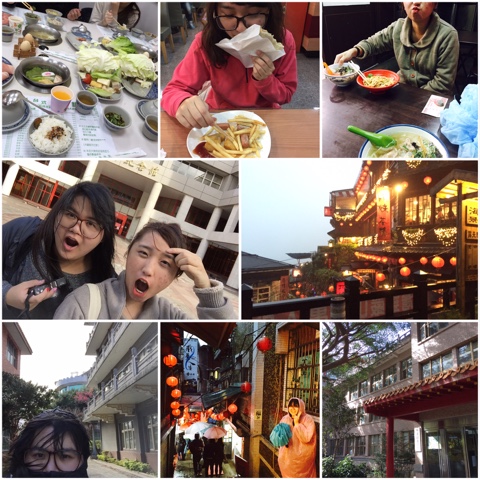 31/01/2015
On this day, I got my nails done at a nail salon professionally for the first time! aaaand, I was totally impressed! The price was reasonable and if it was done in Japan, it would be way more expensive! I loved my nails ♡
After that, albeit late, we went to Miss V's Bakery which is a cute little cafe which serves delicious cakes and one of Sen's friends works! The cafe was so cute and the cakes were delicious! We met up with Haku-San and Irene there, and I also got to meet Ten-chan :)

Dinner at Sen's house was so amazing.. aaaah I felt like I was at a restaurant. It was so delicious and I felt overwhelmed by their kindness once again as after dinner, they drove me to Carrefour which was something they called a 'hypermart' I guess it was similar to Costco but it wasn't in large quantities. I bought goodies to bring home and found my fave Chia Te pineapple cake! 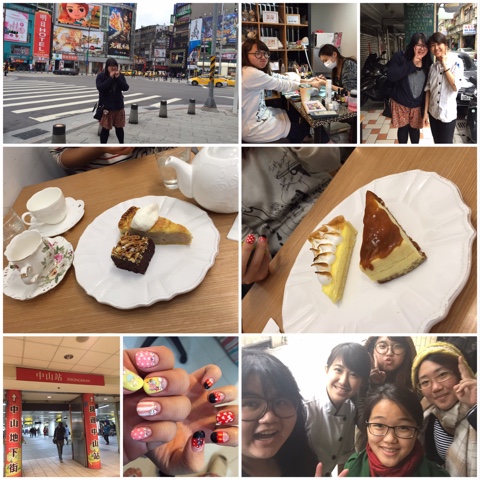 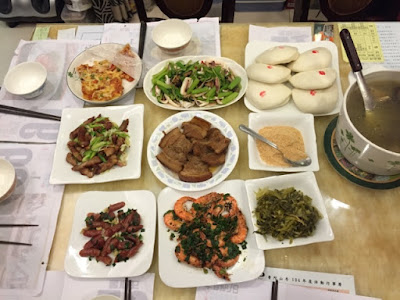 01/01/2015
Sen and I started the day off shopping at Sogo! They had massive sales we didn't want to miss out on so we bought some clothes haha. Then Sen and I went to Din Tai Fung with Haku-San and Sen's friend who I met briefly a year ago in Tokyo was working there so it was good! And Sen's friend Non was kind enough to give us free dessert! Was so good! Yummmmmmy!

After we went to Din Tai Fung, we went to Ximen and it was amazing haha. We met up with Lai at Lattea and got some cool green tea drinks with cheese on top then watched SpongeBob the movie haha its was so funny I loved it, we then took purikura and went shopping around Ximen and I bought myself a Baymax soft toy yay! 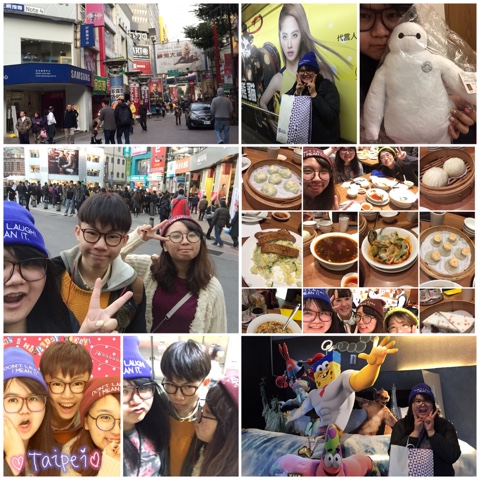 02/01/2015
My laaaast day in Taipei :(
At least it was a good day haha.
Sen had some errands to do during the day so she caught the train with me and Pei-chan met me at the station and we went up
to Taipei 101! Aaaaah, the view from the top was amazing and surreal. I also think that the way the building looks from the outside is amazing. Up the top there were many things to do and see, like learn about Taiwan's history! And it was like right next to a fancy shopping centre and there was so much delicious food everywhere nomnom! But for some reason, Pei-chan and I ended up eating Maccas haha!

After we left Taipei 101, Pei-chan and I met up with Haku-San and we had a yummy mango ice cream parfait thing at a really pretty garden area overlooking Taipei 101 and we took pictures with some pretty flowers, then we headed to Chia ate and I bought more pastries to take home haha.

It was then time to go back to Sen's house, so I said goodbye to Pei-chan, and Haku-San took the bus with me to Sen's house because I didn't know how to get there! OMGSH I'm so lucky that I have people like them around me, so kind and lovely ♡
When I got back to Sen's house, I had dinner and the KFC box was amazing... Colonel Sanders was Taiwanese! Haha.

I packed my stuff, then Sen and I headed to the airport :) 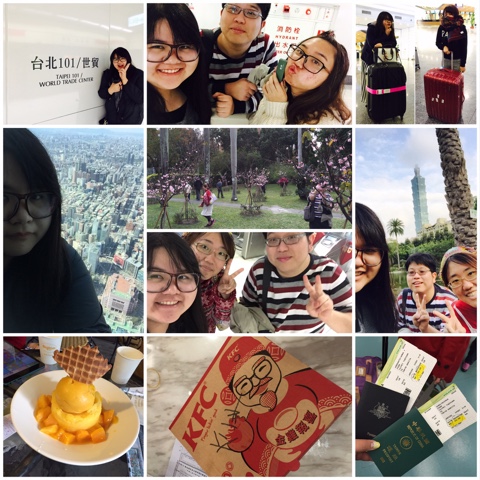