I made friends with quokkas in Perth

So, straight after I got out of the airport from Melbourne, I hurriedly made my way home to repack and get myself ready as I was heading to the airport again because I had a flight that night to go to Perth. It was a domestic flight but it was almost five hours and the turbulence was insane, but thank Heaven that Kathleen was next to me to keep me sane haha. 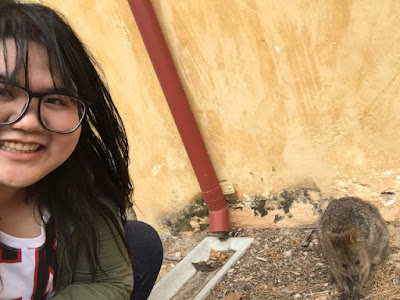 So, we got to Perth Airport and Kenta picked us up at like 12:20 AM and we took a taxi back to his place because we couldn't check into our airbnb room until the morning so we got to his place, freshened up, planned what we were going to do when we woke up in the morning then slept. When we woke up we had to quickly get ready, headed to the station then took a train and bus to East Victoria Park and checked into our accommodation, then the three of us chilled there, and took a nap until we went to Perth City to meet up with another friend Georgiaa and then had lunch, then went to Karaoke at Utopia for three hours haha.

After Karaoke, we went to an all-you-can-eat Korean BBQ and Steamboat. I also met Jason the food baby for the first time this day haha. When we got to the place, the shopkeeper was so funny and cute, she asked me if we've met before because she felt like she saw me the previous week, but then I had to explain to her that I am not from Perth and it was most likely not me haha. 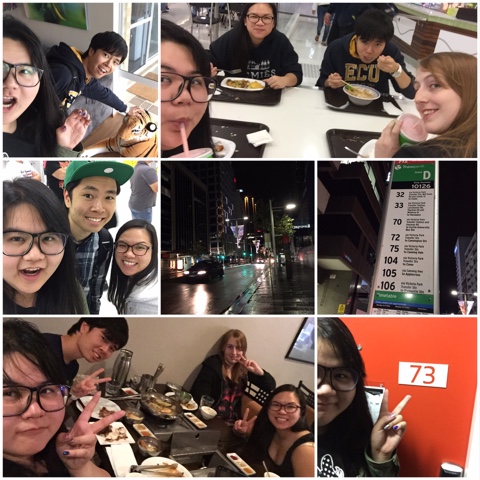 10/04/2015
Met up at Perth Underground station and we also met a new friend named Tom and we all went to Kings Park! It was so beautiful! Even the walk felt so peaceful haha. We had lunch at a cafe in the park but I couldn't finish my food, how disappointing!
After Kings Park, we headed to UWA and wow! It was a nice uni! If anything, it reminded me a little bit of UNSW mixed with Usyd, because of the building structures, then we chilled at a nearby park where it was overlooking the water and talked about some ratchet stuff, i don't know why, don't ask lol.

After that, we went to Esplanade then our new friend had to go and leave for work so we headed to London Court and wow, that was a cute little place which looked like oldskool England! Was soo cute! We got a random guy to take a photo of the three of us at London Court and he did such a fantastic job haha he was like a pro! After that, we went to a Chinese Restaurant because Kenta said the dim sims were good, I think yum cha was only for lunch so we just ate normal food there! I told them to order soft-shell crab. Kathleen and Kenta had never had it before so I was happy when they really liked it wool! We felt like dessert to we went to San Churros haha. 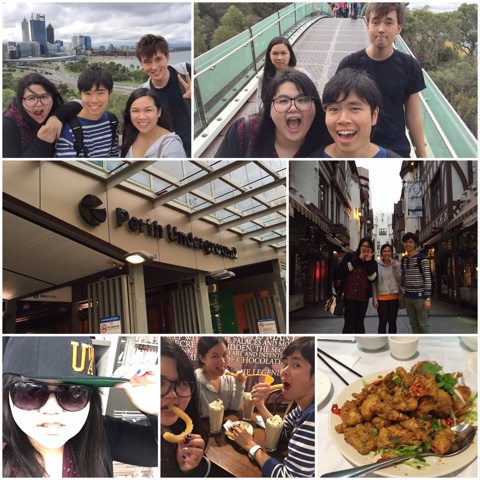 11/04/2015
We headed to Lakeside Joondalup, took some ghetto purikura and met up with Kenta who then took us to ECU so we could properly look at his uni! It was nice and modern and we tried these awesome nap machines at the ECU library which supposedly help students take 'effective power naps' it was funny LOL. So after that, we headed to Lakeside Joondalup again to meet up with Nem who I hadn't seen since I left Tokyo in February of last year so I was really happy to see her! We had lunch, then we window-shopped and did stuff like that, we talked for a really long time and reminisced about the old days! We then went back to ECU Village and chilled in his dorm room and met one of his new friends named Quinnie and she was so nice :)

For dinner we walked back to the shopping centre and we decided to have Hog's Breath Cafe for dinner, walking back to the station became a pain because the shortcut way was already blocked so we walked around to get to the station to head home, but the thing is, it started pouring rain HAHAHAHA so lucky lol. 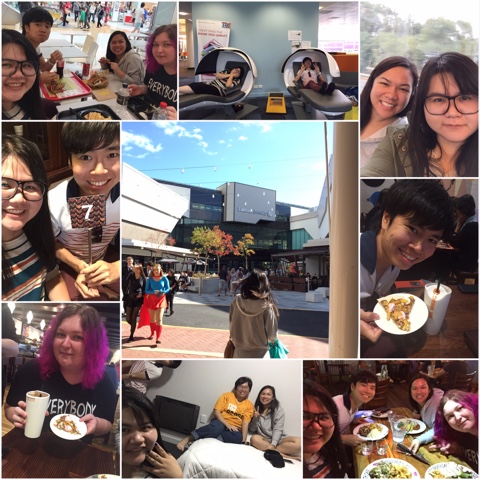 12/04/2015
Woke up with minimal sleep because of the evening before haha :3
We went to Fremantle and it was a nice place, it felt like I had time travelled to like the early 1900s or something. We got to Fremantle and then walked to the place where we had to collect tickets to board the Rottnest Express! Because of the rainy weather, the ferry's captain warned us that it was going to be a bumpy ride. He wasn't joking, the three of us felt like woaaaah, especially Kathleen, she felt like she was getting motion sickness :( But all good, because when we got to the island we felt rejuvenated because it was so beautiful! The water was so nice and ahhhh, it was like paradise! When we got there though, we were so hungry so we went and had drinks at the Dome cafe at the Island. Dome cafe is so big in Perth, I don't know why but other states don't really have it.

After our drinks, we decided to finally explore the island lol. We walked a total of about 14 kilometres throughout the island because we didn't hire bikes haha, uphill and downhill and even walked all the way up the hill where the lighthouse was located, not to mention the temperamental weather where it would start raining then five minutes in, it would stop again, then rain again and so on. The scenery was so beautiful, and there was water which had like pink around it, i don't know how to really describe it but it was really beautiful. Even the windy area near the beach was so beautiful. We got a little bit upset though because we couldn't find any quokkas during the walk lol. Out of nowhere, it started raining really heavily - like beyond anything we had experienced during the past couple of hours so we walked up to the bus stop and waited for a bus. Then a bus came, it wasn't the one we were going to catch but it was like a private bus but then they told us to just get on. I think the bus driver felt sorry for us lol. When we got back to the front part of the island, we found quokkas, where there were so many people. OMGSH lol. We couldn't have just stayed there haha, Joking. If we had stayed then we wouldn't  have explored the island's beauty! Kenta and I were starving so we bought calamari and chips lol.

When it was time to go back, we got on the ferry and the three of us fell asleep, we were so tired! At Fremantle, we met up with Kenta's senpai Keita and he took us to places around Fremantle such as Arthur Head Reserve where there were strong winds again and then took us to a famous fish and chips place and he treated us! So nice :) We walked around Fremantle some more and then headed home! 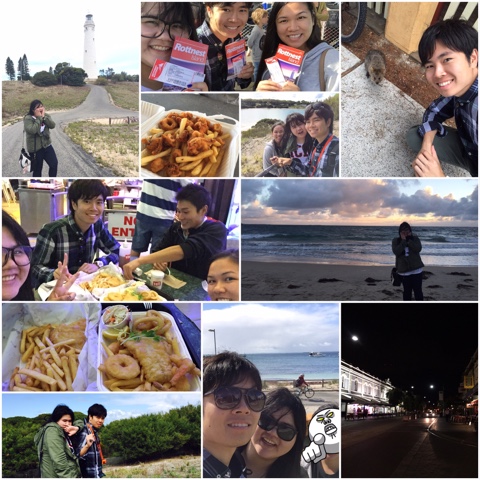 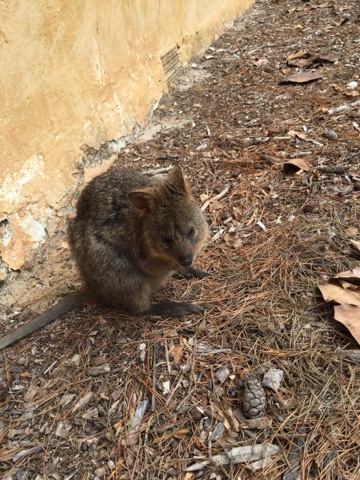 13/04/2015
Last day in Perth was a pretty relaxing one, met up at ECU Village then had lunch there as well. Kathleen and I waited around ECU library until Kenta finished class then hung around the grass area when the three of us were together. After that we went to his dorm room and just chilled, ordered pizza then Kathleen and I headed to the airport as we had a 12:20 AM flight for the 14th. Some delays happened with the trains so we didn't make it to the bus we originally intended to take for the airport and as a result we were extremely late. We felt like we were going to JUST make it to our flight so we did web check-in while we were on the bus. Thank God we did web check-in because when we got to the airport, the check in counter was already closed… we were freaking out but I was so happy we didn't have any suitcases to check in and just our carry-ons. So we went through security and at the boarding gate we asked the people working there how to get our boarding passes since the counter was already closed haha. They gave us some ratchet hand-written boarding passes lol. With about 15 minutes to spare, we made it to our flight haha. Thank God! 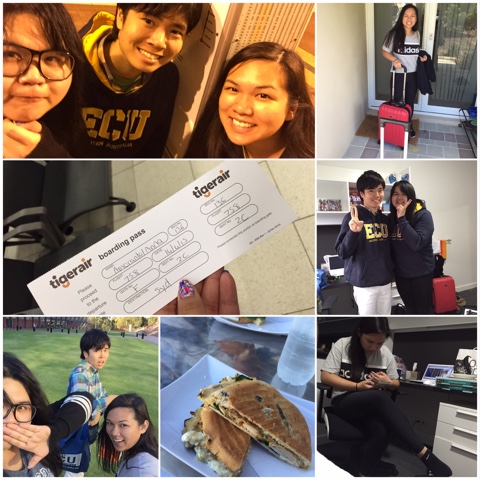 The flight was smooth and we made it back safely to Sydney :)